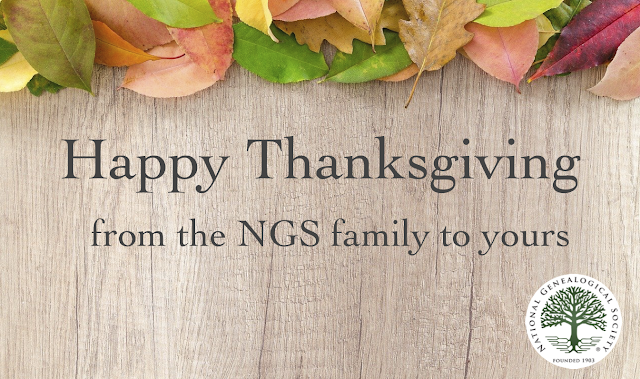 The National Genealogical Society wishes you and your family a wonderful Thanksgiving holiday.

NGS thanks all of our members for their continued support throughout the year. And a heartfelt “thank you” to the many volunteers who make our success possible.

—The NGS Staff and Board of Directors
Posted by Kathryn at Wednesday, November 27, 2019 No comments:

Nominations to the 2020 National Genealogy Hall of Fame

The National Genealogy Hall of Fame is an educational project sponsored by the National Genealogical Society (NGS). The entire genealogical community is invited to participate in this project. Through annual elections to the Hall of Fame, we honor those individuals of the past who made significant contributions to genealogy and set the high standards by which we work today.

Would your society like to honor a genealogist whose unique, pioneering, or exemplary work lives on today? Perhaps there was a notable genealogist in your state or county whose name should be memorialized in the National Genealogy Hall of Fame. If so, NGS and the National Genealogy Hall of Fame would like to hear from you. We are seeking nominations from the entire genealogical community for persons whose achievements or contributions have made an impact on the field. This educational program increases appreciation of the dedication and useful advancements achieved by committed genealogists whose work paved the way for researchers today. This is an opportunity for your nominee to receive National exposure for their contributions to genealogy.

A nomination for election to the National Genealogy Hall of Fame must be made by a genealogical society or similar organization on the official nomination form and National Genealogical Society (NGS) affiliation is not required of nominees, nominating societies, or electors. Thirty-four outstanding genealogists have been recognized for their contributions since 1986. Those elected are permanently commemorated in the virtual Hall of Fame on the NGS website.
The formal Call for Nominations and the Nomination Form can be downloaded from the NGS website.
Posted by Kathryn at Tuesday, November 26, 2019 No comments:

Email ThisBlogThis!Share to TwitterShare to FacebookShare to Pinterest
Labels: Hall of Fame 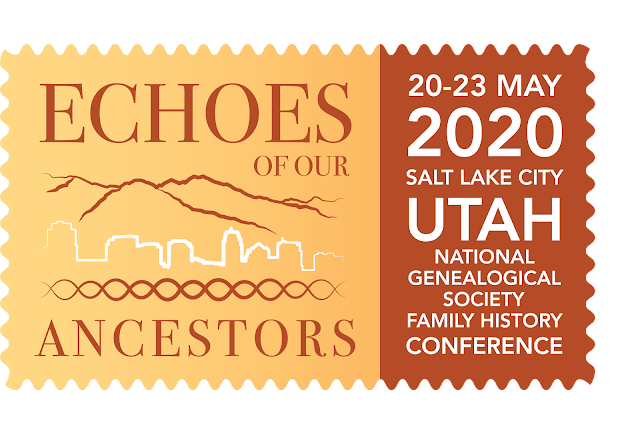 The program for the National Genealogical Society's 2020 Family History Conference, to be held 20-23 May 2020 in Salt Lake City, Utah, is now available online and as a downloadable sixteen-page brochure.

This year’s program, Echoes of Our Ancestors, will feature a variety of lecture tracks and topics on
In addition to lectures that focus on tracing ancestors of European descent, attendees will discover lectures on African American, Asian, Hispanic, Native American, and Polynesian ancestry.

The Board for Certification of Genealogists will again sponsor a skillbuilding track. Conference participants may also enroll in workshops on specialized collections at the world’s largest genealogical library. In all, the conference will offer family historians and genealogists more than 175 lectures, an array of social events, several workshops, and a family history expo with more than seventy exhibitors.

The program will begin with Dani Shapiro, author of Inheritance: A Memoir of Genealogy, Paternity, and Love, who has spent a lifetime writing fiction and memoirs about the corrosive power of secrets within families. She stumbled on a secret of her own: her beloved father was not her biological father. As she writes in Inheritance, “I always knew there was a secret. What I didn’t know: the secret was me.”

The conference will take place at the Salt Palace Convention Center. Registration opens on 2 December 2019. NGS has planned a number of special events with limited seating, so register on 2 December, or as soon as possible thereafter, if you plan to attend any of these events.

To learn more about our special events, see the conference brochure and our program. Participants also will want to sign up early for tickets to the NGS banquet on Friday evening, featuring Steffani Raff, an award-winning storyteller, who will take us on a journey through the history of women’s suffrage.

For up-to-date information about the availability, amenities, and rates for conference hotels, visit the conference website. Be sure to sign up for the NGS conference blog so you do not miss conference news or announcements.
Posted by Kathryn at Monday, November 18, 2019 No comments:

Email ThisBlogThis!Share to TwitterShare to FacebookShare to Pinterest
Labels: #NGS2020GEN

Each year the National Genealogical Society (NGS) recognizes excellence in the field of genealogy by presenting awards to honor individuals and organizations for their volunteerism, scholarship, and achievements. Last year NGS presented awards to thirty-four recipients who made outstanding contributions to NGS programs or performed exceptional work in genealogy, history, biography, or heraldry. The honorees hailed from throughout the United States, representing states from coast to coast. The application deadline for the 2020 NGS Awards and Competitions is 15 December 2019.

“We encourage family historians and genealogists to nominate extraordinary individuals and genealogical organizations,” said Janet Bailey, chair of the Society’s Awards Committee. “They may also submit their own applications for our competitions. Our goal is to recognize and celebrate notable contributions to the field of genealogy.” The awards will be presented at the NGS Family History Conference in May 2020 in Salt Lake City, Utah.


Competitions are as follows:
Entry forms and full information can be found at the NGS website. Questions can be sent to [email protected].

Posted by Kathryn at Tuesday, November 05, 2019 No comments: 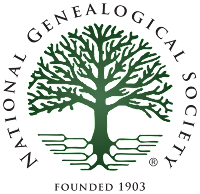 The NGS Board of Directors is pleased to announce the appointment of Matt Menashes as the Society’s executive director. A veteran executive with twenty years’ experience in association management, he will begin his employment with NGS on 1 November 2019. Menashes will lead all operational aspects, while working with the Board to develop a shared vision for the future as NGS moves toward a merger with the Federation of Genealogical Societies (FGS) by October 2020.

Menashes comes to NGS from the natural resources sector, where he was a senior executive in associations in outdoor recreation, coastal and marine management, wildlife, and forestry. He has driven increases in member engagement, revenue, and educational programming for multiple organizations. He is a Certified Association Executive (CAE) and a longtime member of both the American Society of Association Executives and BoardSource. Menashes currently serves on the Board of Leveling the Playing Field, a charity that provides sports equipment to underserved youth throughout the Washington, DC/Baltimore region.

According to Ben Spratling, president of the NGS Board, Menashes was selected through an extensive process that attracted almost two hundred applicants. “We are excited Matt has accepted the position as our executive director. He has an impressive record of identifying and implementing sustainable, long-term growth strategies and is especially gifted at delivering positive results for members. The NGS Board and staff look forward to the innovation and experience Matt will bring to our organization, especially as we move toward our next phase.”

”I am thrilled to have been chosen to serve as NGS’s executive director and to be welcomed into the genealogy community,” Menashes said. “I look forward to working with our great team at NGS and our colleagues at the Federation of Genealogical Societies to move the merger forward, build on our great service to the community, and expand the ways genealogists share and learn together. What a great time to be joining a field with such a wonderful reputation and such significance for families around the world."