The Federation of Genealogical Societies (FGS) has offered NGS members a $10 discount on registration for their virtual conference, which begins 2 September 2020. See more exciting details about their virtual program below or visit the FGS conference website. Details and the discount code have been emailed to members. And if you register before 15 August, you will save $40 on a regular registration with the NGS Member and Early Bird discounts combined.

NGS-FGS Merger Updates
The NGS merger with FGS continues to move forward. NGS and FGS recently met three significant milestones on the way to the merger. First, the NGS Board modified its bylaws to allow genealogy societies and organizations to be members of NGS with full voting rights (one org/one vote). Previously, societies and organizations had no membership voting rights and were only eligible to "subscribe" to NGS publications and programs. Second, the boards of both NGS and FGS approved the legal documents necessary to merge. Finally, the FGS membership vote on the merger, which is required under Illinois law, is now underway. All of these steps are milestones on the path to creating the "New NGS." The next step will be the announcement of the slate of candidates for the NGS Board. The slate includes a new Vice President for Society & Organization Management and additional at-large directors from the FGS ranks. Both organizations remain on target for the final merger that will occur on 1 October 2020.

FGS Virtual Conference Plus NGS Discount
In recognition of the upcoming merger of NGS and FGS, FGS has graciously offered NGS members a $10 discount on registration for its virtual conference. The FGS virtual event will begin with FGS "Live!" on 2 September 2020, starting at 11:00 a.m. (EDT) and concluding at 7:00 p.m. (EDT). In addition to the live event, all conference registrations will include a collection of sixteen society management sessions assembled by FGS and more than thirty sponsored sessions.

The registration packages also allow you to select ten, twenty, or forty-five sessions from the On-Demand content, including more than eighty sessions by leading genealogists from which to choose. All registration packages provide online access to the digital conference syllabus. A special commemorative goody bag is included with the forty-five-session package and you will be entered for a chance to win one of two free registrations to the May 2021 NGS Family History Conference in Richmond, Virginia. If you had already registered for the FGS conference in Kansas City, your registration will convert to the twenty-session conference package. For more information, visit the FGS conference website.


The FGS Live! event will feature lectures from some of the most popular genealogy speakers:

The FGS Live! event will also include special presentations from our two Platinum sponsors:

An online chat will take place during the Live! event and there will be a Q&A session following each session.

The following two-hour workshops will also be held on 3-4 September:

For a full description of the registration packages, a list of the available On-Demand content, a list of all of the free sessions, and much more information, visit the FGS conference website. To learn more, visit fgs.org. 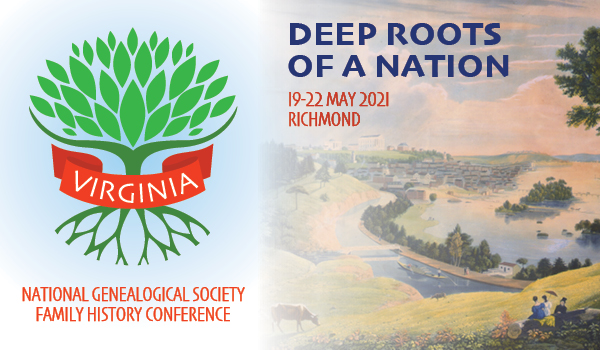 We are pleased to announce that our 2021 Family History Conference is scheduled to take place 19-22 May 2021 in Richmond, Virginia, at the Greater Richmond Convention Center. Information about the Conference’s program—Virginia: Deep Roots of a Nation—and the many genealogical resources in Richmond are now available online as a downloadable brochure.

Conference Committee Chair Janet A. Alpert, FNGS, said, “We are acutely aware that we have to build contingency plans for any eventuality. Though we hope COVID-19 will not be a factor next spring, we are already preparing options to insure the health and safety of registrants, sponsors, exhibitors, and staff. We’re confident that we will have a strong and enriching program for everyone interested in family history research.”

The NGS 2021 Family History Conference program will feature a variety of lecture tracks. Session topics will include African American, Native American, and other ethnic groups research; archival records in Virginia and neighboring states; immigration and migration; researching federal and local government records as well as land, military, religious, and tax records; using DNA to trace your ancestors; and much more. In support of NGS’s merger later this year with the Federation of Genealogical Societies, a “Focus on Societies” day is also planned. The Board for Certification of Genealogists will again sponsor a skillbuilding track.

The conference will also offer family historians and genealogists an array of other events, special workshops, and a family history expo with a host of exhibitors. Registration opens on 6 January 2021. Be sure to sign up for the NGS conference blog to receive up-to-date conference news and download the 2021 announcement brochure to learn more about the Richmond conference.

Email ThisBlogThis!Share to TwitterShare to FacebookShare to Pinterest
Labels: #NGS2021GEN

The July–September 2020 Issue of NGS Magazine is Now Online 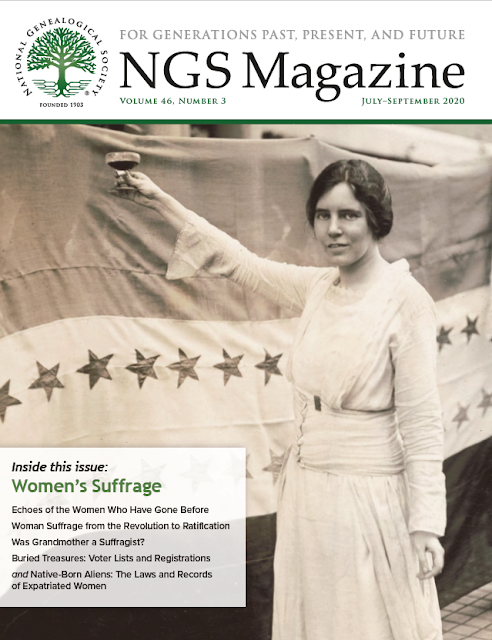 The July–September 2020 issue of NGS Magazine, Volume 46, Number 3, is available online in the Members Only section of the website. It will be mailed to members in the coming weeks.

To paraphrase the authors of Woman Suffrage and Politics, Carrie Chapman Catt and Nettie Rogers Schuler, this issue “is dedicated on behalf of the women who have gone before to the women who come after”—and to all victims of sexism and racism.

American woman suffragists displayed astonishing determination in nine hundred campaigns to convince male voters to allow them to vote. Twenty-six countries gave women the right to vote before suffrage was finally ratified in the United States in 1920. In celebration of the centennial, dramatist Steffani Raff portrayed Emmeline B. Wells, a Utah suffragist, during the NGS Live! program; in this issue, she answers questions about how she developed her performance.

But the women’s suffrage struggle was not always based on equal rights, as Eileen Muccino points out in a history of the movement. Some leaders opposed the Fifteenth Amendment granting suffrage to African American men, in an attempt to persuade southern states to adopt women’s suffrage. For many years the national suffrage organizations rejected Black women, immigrants, and working-class women. Eventually the suffragists’ massive efforts shifted the tide of public opinion, and the Nineteenth Amendment was ratified by a one-vote margin. Some American women could not vote until long after 1920, however.

Voting records from before and after the passage of women’s suffrage may hold valuable genealogical information. Rebecca Whitman Koford describes uses for registration and turnout registers and provides an extensive list of digitized voting records. Her summary of the checkered history of American voting rights demonstrates sexism and racism for more than two centuries.

Thousands of women born in the United States, including many suffragists, lost their citizenship when they married unnaturalized immigrants. These women could not vote until they were repatriated, some as late ast the 1970s; others never repatriated. Rich Venezia outlines the history of the relevant laws and the records normally restricted to immigrant aliens in which native-born women appear.

In other articles, Janice Lovelace discusses diaries, letters, and records for researching the women settlers of the West, and Teresa Kelley and Robin Dwyer-Maurice profile repositories in the vicinity of Richmond, Virginia, to consider visiting before or after the 2021 NGS Family History Conference. In their columns, Paul Woodbury explains how spit samples are processed to reveal DNA results, and Carla Cegielski covers useful methods of cataloging book collections.


NGS Magazine is published quarterly to update members of the National Genealogical Society on NGS activities and to provide genealogists with special information and guidance on conducting effective genealogical research. The magazine is sent to libraries by subscription. Online access to NGS Magazine is available only as long as membership is active.
Posted by Kathryn at Wednesday, July 08, 2020 No comments:

Once an individual purchases a package, he may choose from more than eighty-five sessions that cover a comprehensive range of topics, including DNA, ethnic heritage and women, immigration and migration, records and resources, religion, and research techniques and methodology. To learn more, download the Sessions Guide for the full list of webinars.

Registrants can view or listen to webinars on their computers or mobile devices at their convenience until 15 May 2021. Registrants also are invited to explore the NGS Virtual Expo Hall.

The three package options at PlaybackNGS.com include:

The “Full” Package includes streaming access to a choice of twenty NGS 2020 On-Demand! sessions from 1 July 2020 through 15 May 2021; an electronic copy of the virtual conference syllabus; and 26 bonus lectures.

The “Works” Package includes everything in the Full Package with an additional twenty-five NGS 2020 On-Demand! sessions (a total of 45 lectures you choose); a USB with audio recordings of ALL the recorded sessions (more than 100 hours of audio content that can also be streamed to a mobile device); plus, 26 bonus lectures.

NGS 2020 “Light” Package includes streaming access to a choice of ten NGS 2020 On-Demand! sessions from 1 July 2020 through 15 May 2021; an electronic copy of the virtual conference syllabus; and 26 bonus lectures.

For more information about NGS 2020 On-Demand! or to register, visit PlaybackNGS.com.
Posted by Kathryn at Tuesday, July 07, 2020 No comments: