African American Roots: A Historical Perspective is a cloud-based, self-paced course that introduces you to the uniqueness of searching for African American ancestors. A mixture of history and genealogy, it discusses the role Africans and African Americans played in the birth and growth of the United Sates from as early as the fifteenth century. Armed with this historical perspective, family historians learn where they might find information about African Americans in general and their own ancestors in particular. 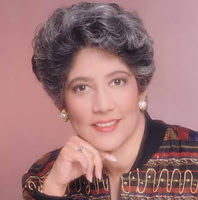 Janice Lovelace, PhD (psychology)
developed the course for NGS.
Lovelace has more than thirty
years of experience in
genealogical research and
has presented nationally on
methodology, DNA, and
ethnic minority genealogy.

Federal Land Records is a self-paced, online course that introduces you to the different types of land entries including cash entries, donation land, homesteads, and military bounty land, and discusses how land ownership was transferred from the federal government to an individual or group. More than three million people received patents from the government in the thirty public land states. The land application files may contain valuable information for genealogists including details on family members, neighbors, citizenship status, and land improvements. This course teaches you how to access these federal land records. 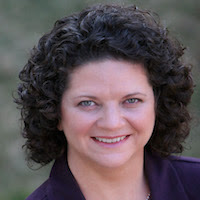 Angela Packer McGhie, CG developed
this course for NGS. McGhie
is a professional researcher,
lecturer, and instructor.
She has been working
with federal records at
the National Archives for
the last decade, and specializes
in federal land records.

These courses are just two of a number of online NGS courses that offer the convenience of completing a genealogy course over a period of months at any location and at any time. They are available for $45.00 for members and $70.00 for nonmembers. For further information or to purchase the course, visit NGS Continuing Genealogical Studies or the NGS Store.

Good News! The National Genealogical Society will release three Research in States guide books at its 2018 Family History Conference in Grand Rapids, Michigan, 2-5 May 2018. Two are new releases —Research in Massachusetts and Research in Rhode Island—as well as a revised and updated edition of Research in Michigan. These excellent guide books will help you dig into some excellent new sources for your family research in these three states. Sales begin in the NGS online store and at the NGS booth on Wednesday, 2 May. 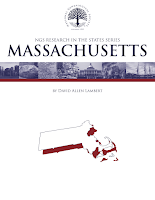 Research in Massachusetts by David Allen Lambert provides a solid framework and useful tool for researchers looking for subject matter linked to Algonquian Indian tribes, a Mayflower ancestor, and first settler documentation. Also covered are resources for family historians who are researching ancestors from Africa, England, Ireland, Scotland, and Wales who continued to arrive throughout the eighteenth century as well as later emigrants from Canada, eastern Europe, Italy, and Portugal. Other resources such as qualifying military service are also discussed in this guidebook.

David Allen Lambert is the chief genealogist of the New England Historic Genealogical Society. The author of A Guide to Massachusetts Cemeteries, he has published numerous articles and is the tribal historian for the Massachuset-Punkapoag Indians. 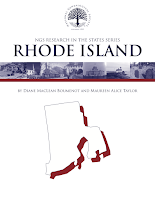 Authors Diane MacLean Boumenot and Maureen Alice Taylor are members of the Rhode Island Genealogical Society. Boumenot has worked to demystify Rhode Island genealogical research on her website One Rhode Island Family. Taylor is the author of three books on Rhode Island as well as The Last Muster (2 vols) and The Family Photo Detective. 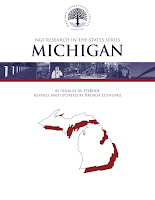 Research in Michigan by Brenda Leyndyke provides an overview of Michigan’s history and settlement patterns from its first French settlement in 1668 into the twentieth century. This comprehensive guidebook includes information on major research centers as well as locally-focused institutions. Family historians learn about the court system and how to access the numerous published decisions. An extensive section on ethnicities features information on fourteen groups with ties to Canada and Europe as well as resources on African Americans, Arab Americans, Asians, Chaldeans, Hispanics, Native Americans, et al. Other sections cover maritime and township research, documents on orphans, prisons and schools, and Works Progress Administration (WPA) publications.

Brenda Leyndyke is the president of the Calhoun County (MI) Genealogical Society, a board member of the Michigan Genealogical Council, and the author of an award-winning genealogy blog.

The NGS Research in the States series is edited by Barbara Vines Little, CG®, FNGS, FVGS. Research in Massachusetts, Research in Michigan, and Research in Rhode Island will be available for purchase in the NGS online store in both PDF and print versions on 2 May 2018. 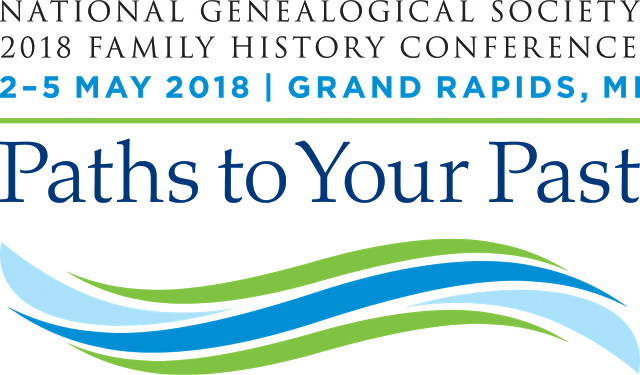 If you are still planning to join us at the annual conference, there are only a few days left to pre-register for the NGS Family History Conference in Grand Rapids, Michigan, 2‒5 May 2018. Pre-conference registration ends 20 April. On-site registration and check-in will be available beginning at 12:00 noon, 1 May, in the DeVos Place Convention Center. For conference information and to register, go to online registration.

Registration for all meals, social events, and pre-conference tours also closes on 20 April. Ticket purchases will not be available on-site at the conference for meals, social events, or tours. Only a few spots remain for the Grand Rapids City Tour and the Civil War Tour. Seats are still available for meal events including the WMGS Host Event at the Gerald R. Ford Presidential Museum, and the NGS Banquet with guest speaker Ric Mixter who will share riveting stories about famous storms and shipwrecks on the Great Lakes. The pre-conference research excursion to the Library of Michigan and Archives of Michigan is sold out.

Be sure to make your reservations now at our online conference registration page.

If you have already registered, and you want to add pre-conference events, local tours or social meal events to your existing registration, log on at the NGS Store to view "My Events" and select "Add Sessions."

The conference program, Paths to Your Past, features more than 175 lectures from basic to advanced genealogical research, including four days of the Board for the Certification of Genealogists (BCG) Skillbuilding lectures. The DNA track will include twenty presentations on DNA discoveries, science, and methodology. Friday and Saturday will feature lectures on African American, Native American, Jewish, and other ethnic groups. Other tracks will include resources in Michigan, New York, midwestern states, Canada, and some European countries. With more than twenty tracks, there is a wide of variety of lectures from which to choose. You do not want to miss this year’s exciting conference program. Register today!

Email ThisBlogThis!Share to TwitterShare to FacebookShare to Pinterest
Labels: #NGS2018GEN

Start planning your trip to Grand Rapids now.  It’s just three weeks away. Everything you need to plan a successful conference trip is at your fingertips using the NGS Conference App and your mobile device.

The Mobile Conference App for the National Genealogical Society (NGS) 2018 Family History Conference is designed to keep you informed. And the app is available for iOS, Android, Blackberry, Windows Phone, and web-enabled devices. The conference will be held in Grand Rapids, Michigan, 2‒5 May 2018. There is still time to register for the conference, visit https://conference.ngsgenealogy.org/register/.

To download the free NGS Conference App, go to https://conference.ngsgenealogy.org/attend/mobile-app/. Or search your app store for NGS Family.

If you already have the NGS mobile app on your phone from a past conference,


Some of the convenient features on the app allow users to

We encourage you to begin using the app now so you can improve your conference experience in Grand Rapids. You do not have to be registered for the conference to view all the events and lectures and use the app.  But time is running out.  Register online by 20 April, or after that date, register in person at the conference.

Hope to see you in Grand Rapids!

Founded in 1903, the National Genealogical Society is dedicated to genealogical education, exemplary standards of research, and the preservation of genealogical records.  The Falls Church, Virginia, based nonprofit is the premier national society for everyone, from the beginner to the most advanced family historian, seeking excellence in publications, educational offerings, and guidance in research. It also offers many opportunities to interact with other genealogists.

Posted by National Genealogical Society at Thursday, April 12, 2018 No comments: