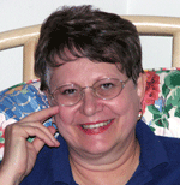 The National Genealogical Society mourns the loss of Marsha Hoffman Rising, a former Vice President and director of NGS, as well as a contributor to the NGS Quarterly. In tribute to Marsha's character and contributions to the genealogy community, NGS President Jan Alpert noted, "In researching and writing Opening the Ozarks, First Families of Southwest Missouri, Marsha undertook a project of monumental proportions, which will benefit family history researchers for generations to come. I was fortunate to get to know Marsha and her husband Dean on several trips to England. Her perseverance, despite serious health issues, is an inspiration to us all."

The following tribute also offers an opportunity to honor Marsha's memory, established by her friends and colleagues, by donating to a project that Marsha heartily supported, the War of 1812 Preserve the Pensions Fund.

The Federation of Genealogical Societies, the National Archives, and the genealogical community have started a project to digitize the War of 1812 pension files -- a fitting beginning to the bicentennial commemoration of this important war.

Marsha Hoffman Rising, CG, FASG, died 17 February 2010. A Certified Genealogist, Marsha was a Past President (2002-04) and Fellow of the American Society of Genealogists and a contributing editor to The American Genealogist. She was a Trustee of the New England Historic Genealogical Society (2001-03). Marsha was also a past board member of the National Genealogical Society and a Past President of the Federation of Genealogical Societies. During her tenure with FGS, Marsha strongly supported the preservation of the War of 1812 pension documents. When informed of the 2010 pension digitization project and the Tribute in her honor, she was delighted. She remarked on how helpful the pensions had been when she was compiling her book, Opening the Ozarks. First Families of Southwest Missouri (4 volumes published by American Society of Genealogists). The information contained within the pension and bounty land files helped her add much family detail and identify places of origin for the settlers.

Friends and colleagues have established this special category of contributions to the War of 1812 Preserve the Pensions Fund, titled "A Tribute to Marsha Hoffman Rising." Donations received in Marsha’s name will go towards making these records available online for interested researchers. A donation of $25 will digitize 50 images; a donation of $500 will digitize 1,000 images. Mail to:

The names of donors will appear in FORUM Magazine and notification will be sent to Marsha’s family.