Did Grandpa Serve in Mexico? 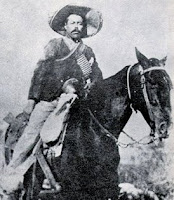 My grandfather keeps trying to get my attention about his military record, which I had ignored for too long.

About a month ago I reviewed some of my father’s genealogy files for examples I could use in my lectures at the upcoming NGS Family History Conference in Salt Lake City, Utah, 28 April – 1 May 2010. A newspaper article from the Rockford (Michigan) Register dated 16 June 1966 caught my attention. It was the 50th Anniversary of Rockford Guardsmen in “M” Company, Grand Rapids Battalion, 32nd Michigan Infantry, serving in the Mexican War. The article included a photograph of eleven men with rifles. My grandfather was one of the men in the back row.

I don’t remember seeing this newspaper clipping ever before. However, I remembered that my grandfather’s World War I draft registration said something about earlier military service, so my next step was to review the record on Ancestry.com. The draft registration card for Lance Nutter was dated 5 June 1917. In answer to the question, “What military service have you had,” Lance's card said, “rank of private, independent branch, for one year.”

I sent an email to my uncle Neill to ask him if my grandfather ever mentioned serving in the Mexican War. His response was “Dad NEVER mentioned military service of any kind. Sorry I can’t help.” My uncle went on to mention that he had been to Pancho Villa State Park in New Mexico some years back, where most of the military were stationed during that time.

Grandpa's visit to Pancho Villa State Park could be a significant clue to his service. Mexico's internal revolution began in 1910. In 1913 U.S. President Taft stationed troops along the Rio Grande to protect Americans in the area. When Woodrow Wilson became President, he increased the U.S. forces - and Mexican resentment as well. From Mexico's 1915 election rose Francisco “Pancho” Villa, who was loved by millions of revolutionary supporters and hated as a ruthless bandit by many others. Villa's exploits along the border caused the U.S. to organize a punitive expedition of about 10,000 men, but they never managed to capture their quarry. At the same time, European troubles were escalating into a world war; in early 1917 the U.S. troops were redirected, and the U.S. negotiated better relations with Mexico.

I put the newspaper article in my pile of genealogy materials to take back to Michigan this summer for further research, along with the notation, "Check Michigan National Guard records 1915-1917."

A few evenings later I picked up the New York Archives, Winter 2010, Volume 9, Number 3, which had recently come in the mail. The cover included two soldiers in uniform with the caption “Keeping Out Pancho Villa.” The article, which began on page 13, mentioned that “over 100,000 National Guard troops were activated to patrol the American side of the border” to keep Pancho Villa and the Mexican rebels from raiding New Mexico border towns. If my grandfather had indeed served along the border in 1916, this article provided more details about their living conditions and duties. Most of the soldiers never encountered the rebels but suffered from the heat and disease.

This week I received the January/February/March 2010 issue of Michigana, published by the Western Michigan Genealogical Society. Page 31 included a list of the Michigan National Guard companies in the 33rd Regiment that were deployed in the Mexican Border Campaign on 19 June 1916. My grandfather’s company and regiment were not listed, but this article was part three of an earlier series of records compiled by LeRoy Barnett, Ph.D., who had served as a reference archivist at the Archives of Michigan. Copies of the earlier issues are at my Michigan home.

One article would be a coincidence. Three articles have definitely gotten my attention. So Grandpa, I hear you. I promise more research this summer on your Mexican War service in 1916 and to write and share your story with the family. The first stop will be the Archives of Michigan.

You can read more about the Mexican Expedition at http://www.globalsecurity.org/military/ops/mexican_expedition.htm