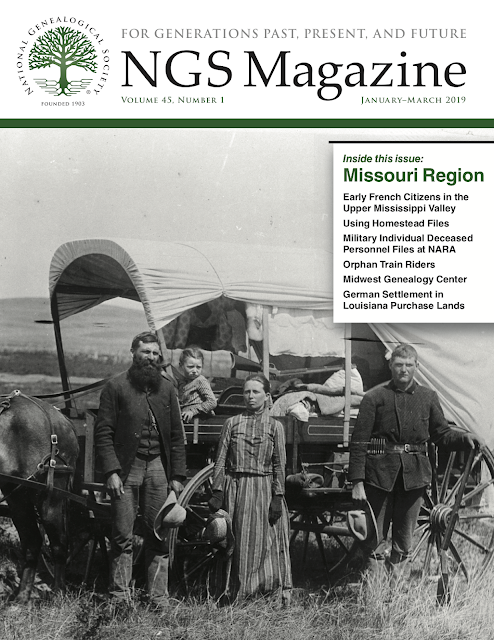 The January-March 2019 issue of NGS Magazine, Volume 45, Number 1, has been mailed to members and is available online in the Members Only section of the website.

In celebration of the NGS Family History Conference in May in St. Charles, Missouri, this issue explores the history, people, resources, and repositories of Missouri and some of its neighbors.

French citizens settled in what was New France as early as 1720. After the French and Indian War ended France lost its land west of the Mississippi to Spain, but many French practices continued. Ann Fleming describes the history, cultural influence, and records of early French residents in Missouri and Illinois.

Germans have left their mark in several states within the Louisiana Purchase: Louisiana, Missouri, Kansas, Nebraska, and the Dakotas. Kathy Petlewski outlines the history of German settlement in these states and cites sources with further information.

The Homestead Act of 1862 was a prime motivation for millions of settlers to travel west and obtain their own land by meeting the law’s requirements. Gail Blankenau demonstrates the valuable types of information contained in homestead records and explains where to locate them.

Over two hundred thousand children in New York City and Boston were sent west to new homes because one or both of their parents were unable to care for them, and the managers of orphan asylums believed the children would be better off on farms. Clark Kidder discusses the history and records of the orphan train movement and provides contact information for thirteen asylums.

Two repositories in Missouri are particularly notable for genealogical research. Cheryl Lang highlights the materials and databases of the Midwest Genealogy Center in Independence, Missouri, three hours from St. Charles. Bryan McGraw lists a variety of records held in the National Archives at St. Louis, with a focus on Individual Deceased Military Personnel Files, and provides details about access.

In their columns, Claire Prechtel Kluskens features an example of an unusual Civil War accounting record, and Jordan Jones evaluates three types of task management tools. This is the final column by Jordan, NGS Magazine’s expert technology columnist for the past ten years. Many thanks to Jordan for his contributions, which have helped readers enhance their use of technology in genealogical research.


“A Comfortable Place to Live In”: Using Homestead Files in Family History
by Gail Shaffer Blankenau

Researching at the Midwest Genealogy Center by Cheryl Lang, MLS

NGS Magazine is published quarterly to update members of the National Genealogical Society on NGS activities and to provide genealogists with special information and guidance on conducting effective genealogical research. The magazine is sent to libraries by subscription. Online access to NGS Magazine is available only as long as membership is active.