Ancestors who provide a bridge in family migration 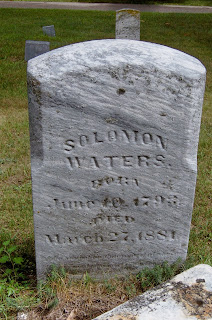 When my father and I first visited the Oak Grove Cemetery in Lawton, Michigan, more than twenty years ago, the tombstone for our ancestor, Solomon Waters, looked lonely by itself. From the census, I knew that in 1880 he was living with his daughter and son-in-law in Williamsfield, Ashtabula County, Ohio. At that time I did not know the events that caused him to move to Michigan so late in life and then die of dropsy less than a year later. I assumed he had come to Michigan to live with his son Solomon in Decatur, Michigan. However, if that was true, why was he buried by himself in Lawton?

Born in Connecticut in 1793, Solomon Waters is one of those ancestors who not only lived a long time, but also was the bridge connecting my Waters family from its early roots in Connecticut to the Connecticut Western Reserve in northwest Ohio and finally to western Michigan. What I have only recently begun to appreciate is how many of his family were already in Michigan when he arrived. Our ancestors rarely moved alone. They usually moved in family groups or in a chain migration, where the more adventurous moved first and the siblings and cousins followed.

Solomon Waters and Anna (Reed) Waters had seven children I can now identify. It has taken me a while because most left home before the 1850 U.S. Census enumerated everyone living in the household. Only Oliver, aged 17, was still living at home in 1850. Although I found several of Solomon’s siblings living nearby in Andover, I didn’t find any of his other children. Four of the children were daughters, so I had to identify their maiden names at a time before there were vital records.

Solomon Jr. provided many of the clues. He died in 1907, and his obituary said he was one of seven children and only a sister, Mrs. James Wade in Pennsylvania, survived him. The obituary also listed the names of those attending the funeral and said seven of his nephews were pall bearers.

Solomon Sr.’s children had moved to Williamsfield, Ohio; Crown Point, Indiana; Crawford County, Pennsylvania; and Van Buren County, Michigan. His oldest son, William Boyd Waters, had died in 1852 and was buried next to Solomon’s wife Anna in Crawford County, Pennsylvania. William’s son moved to Van Buren County, Michigan, after he served in the Civil War. Solomon Jr. arrived in Decatur, Michigan, in 1865. By 1860 his eldest daughter, Elizabeth Stone, and his youngest son, Oliver Waters, were living in Lawton, Michigan.

In, November 1880 Solomon was living with daughter Julia Clark in Ohio when she passed away. This is why, despite his age and health, Solomon went to Michigan to live with eldest daughter Elizabeth. In this case, tracking the father helped me locate some of the children and nephews who also migrated west. I want to thank Toni Benson at the Van Buren Regional Genealogical Society who provided copies of many obituaries which helped me fill in missing pieces. All in all, by the time of Solomon Sr.’s death, three of his children and numerous grandchildren lived nearby. His daughter, Elizabeth Stone, is buried next to him, and ironically she has no tombstone. Several more of his descendants are buried elsewhere in the Oak Grove Cemetery.

I am still filling in the descendants, hoping to find a living Waters male who can participate in a Surname DNA study so that we can build the Waters bridge into the twenty-first century.

Do you have any ancestors who provide a bridge for you as they migrated from the east to the mid-west or perhaps from the mid-west to the west? What other ancestors can they help you find?
Posted by Pam Cerutti at Sunday, September 27, 2009 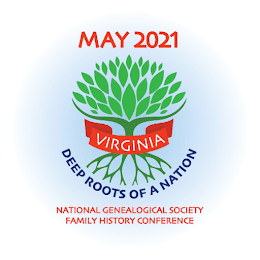