NARA Seeks to Shrink Research Space and Services in D.C. 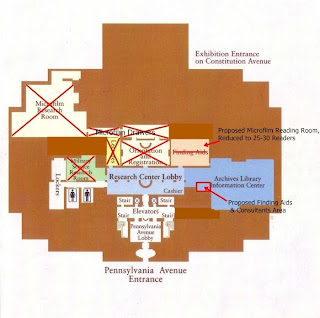 The National Archives and Records Administration (NARA) has proposed some major changes that will significantly reduce the space and services available to researchers who wish to use NARA records in Washington, D.C. Specifically, the proposal is to relocate the Finding Aids/ Consultants to a smaller, open space within the library, reduce the number of microfilm readers, and replace self-serve microfilm access with a "pull on demand" process that requires staff to retrieve each film as someone requests it.

In addition, the space of the research facility will shrink as the microfilm reading room will be moved to the old Finding Aids/Consultants room, and other spaces are eliminated, including the Military Services Research Room and the Lecture Room. Click on the picture on the left to enlarge the floor plan showing the affected areas.

Marie Varrelman Melchiori, CG, CGL, Coordinator of the Archives 1 User's Group, noted that the areas lost to researchers would be used to expand the exhibition area and shops that are part of private sector partners of NARA, the Center for the National Archives Experience (NWE) and The Foundation for the National Archives. The User’s Group is seeking support from the genealogy community to protest these losses to the public and to publicly discuss alternatives. Marie also noted that some of these changes may be acted upon even before the 2011 budget dollars are allocated to the plan.

If you are concerned about this issue, below is a list of contacts to whom you can express your concern. Following the contact list is a form letter that you can use as a starting point for your own letter.

The nominee for the position of Archivist. Since the nominee has yet to be confirmed, you may want to write him at his present position in New York as well as at the National Archives:

Members of Congress who have previously demonstrated a strong interest in the affairs of the National Archives:

As member of the [insert your organization name], I am a researcher who uses National Archives records. I am very concerned about proposed construction plans to reconfigure the ground (first) floor of the National Archives building. This will dramatically reduce the Robert M. Warner Research Center in ways that will significantly--and negatively--impact researchers as follows:

The Finding Aids Room (Consultants' Office) is to be moved from its current room, which provides adequate space for staff, researchers, and necessary finding aids to textual (un-filmed) records, to a small open area in the library which will not provide adequate working space or privacy.

The Microfilm Reading Room will be moved to a drastically smaller space (the current Finding Aids Room) with significantly fewer microfilm readers. We recognize that the number of researchers using the microfilm area has diminished over the past few years, but there is still a demand to use microfilm. We suggest a room containing at least 30 readers, which would be approximately half the current number.

Direct researcher access to microfilm collections will be eliminated and replaced with a "pull on demand" system. We believe it is unworkable, and result in much wasted researcher time by requiring researchers to request individual rolls of microfilm, and then wait for a staff member to retrieve it from a stack area deep within the building. No one has been able to tell us where the microfilm will be stored or how long it will take to retrieve it.

The Lecture Room will be eliminated. No one has been able to tell us where a New Lecture Room would be. This room is used frequently for NARA public programs (genealogy lectures, etc.) as well as internal NARA meetings.

NARA proposes a five-phase operation with the first phase being the move of the Finding Aids (Consultants' Office) the Library area starting in the very near future. There is no indication that the finding aids, so vital to textual research, will be in close proximity to the consultant area. The second phase would be the move of the microfilm reading room.

I would like a dedicated (i.e., single use) Finding Aids Room to continue and to maintain the existing manner of direct researcher access (self-pull) to microfilm.

I would like to request that there be an open disclosure and a public discussion of these plans. There does not appear to be any attempt to incorporate the open area in the Research Center Lobby.

Thank you for your consideration.
Posted by Pam Cerutti at Tuesday, October 20, 2009