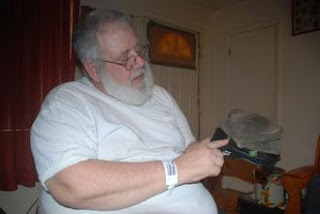 Terry Crowley of Lake Havasu, Colorado, goes out of his way to tell his great-grandfather's stories to anyone who will listen, and every July he does it while wearing a special family heirloom – a hat worn by his great-grandfather during the Civil War. The hat, Crowley said, has seen many battlefields, possibly including the battle of Gettysburg, which marks its 147th anniversary this July.

Crowley’s great-grandfather, Jebediah Oakes, fought with the Fourth Alabama regiment and was one of only 202 soldiers still alive at the end of the war when General Robert E. Lee surrendered at Appomattox, according to Alabama National Guard archives.

To read the entire article about Crowley and his great-grandfather in the Havasu News-Herald, click here.
Posted by Pam Cerutti at Monday, July 19, 2010