My Veteran Ancestor: A Fortunate Find 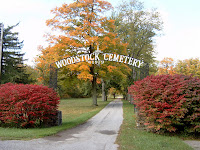 On Memorial Day we think about our ancestors who were veterans and all the memorials we have seen in county squares commemorating the various wars. I usually take a picture if it is a county where my ancestors lived, even if they are not listed on the memorial, because I may later find a sibling or in-law among those named.

For the longest time I thought I had no ancestors who served in the Civil War. Then, as I expanded my research to include siblings and extended families, I discovered wonderful family history information in those Civil War records. 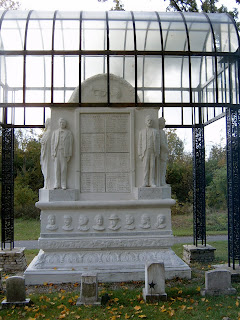 The picture on the left is from a Civil War Memorial in the Woodstock Cemetery, in Woodstock, Champaign County, Ohio. I was fortunate to be there last October when the leaves were changing color. Joseph Chamberlin, the brother of my great, great grandmother, is listed on this memorial and is buried in this cemetery. He served in the Sixth-sixth Ohio Regimental Band from 1861 until August 1862, when he developed rheumatism and heart trouble. By researching him, I found his parents – my great, great, great grandparents – also buried there. In the years before we had online access to censuses, my last record for his parents had been deeds in western New York decades earlier.

The best family history information is found when a soldier's request for a pension is denied. One example is the military pension file of James J. Waters, nephew of my great grandfather, who served as a Corporal in Company B, 23rd Ohio Infantry. The reference for this file is Record Group 15: Records of the Veterans Administration. Civil War Pension Application. Invalid Application No. 90532, Soldier's Certificate No. 58101, Widow's Application No. 1062686, and Widow'sCertificate No. 806682 [Caroline E.], National Archives, Washington, DC. His file had 151 pages, and the file for his widow had 96 pages, a virtual goldmine of family history. He contracted a severe case of measles in the fall of 1861 while serving in West Virginia. This caused him to be hospitalized and lose his sight for a number of days. His sight never fully recovered; by the time he was 50 years old, he was almost blind. On 13 August 1913 he wrote the Commissioner of Pensions as follows:

Dear Sir: I send you statement of facts so far as I can remember in answer to questions required in letter 16 of July, names of parents. W. B. Waters and Jane P. Waters both parents deceased when I was a small boy mother when I was about 5 yrs & Father when I was bet 7 & 8 yrs old. In 1850 I cannot tell where I lived but think was with my grandmother Jackson of Hartstown, Crawford Co., Pa. She died many years ago and all of Family she was the one who had the corect record of my birth. My sister in Florida wrote me before she died and gave me my brothers age also hers both dead and also that I was born in May 1843. I cannot establish the facts any more clear. I hope this will prove satisfactory.
Truly Yours.
James J. Waters Lawton, Mich.

This is just one of several letters he wrote to prove he was the soldier who served. Each time the pension office denied his claim, James would write again providing more details, perhaps asking other relatives for more information. Several cousins provided affidavits since his siblings were deceased.

I have often thought how fortunate I have been to hit a brick wall in some families. When I'm stuck, I have to expand my research, and that's when I find the wonderful stories that would have been lost forever in the family if it had been easier to identify all my great, great grandparents.
Posted by Pam Cerutti at Sunday, May 30, 2010