Alcohol -- Legal and Illegal has a long history in the U.S. -- Did your ancestor's imbibe?

It’s always fun when a bit of serendipity comes along.

Just last week I was researching in the Benjamin Austin and Henry Reid Papers, 1756 (1790-1820) 1879, at Duke University.  This collection includes some late 1790s to early 1800s (I looked at c. 1793-early 1820s) account ledgers.  I was struck by how most of the earlier ledgers referenced “fluid volumes” (e.g. gallons, pints, etc) though later ones list a greater variety of products sold.

The finding aid was little help ...

Correspondence and other papers of Benjamin Austin and of Henry Reid, also a Justice of the Peace, consisting of legal papers, court records, tax lists, militia rosters, election lists and returns. There are also personal letters from relatives in , , and . Topics include blacksmithing, farming, abolitionist sentiment in , and politics.

Even though these gentleman lived in Burke County (NC), we weren’t talking the 1920s, Prohibition and Bootlegging and NASCAR.  I also had no information to suggest that either managed an establishment where liquor would have been sold.

So, I was curious to learn more of the story. After all, the names of just about every neighbor were listed in these ledgers.

Entrepreneur Henry Reid made a small fortune operating a distillery in during the 1790s. Not satisfied, Reid expanded his liquor enterprise by purchasing a store, where he sold whiskey to neighbors and travelers and bought corn from nearby farmers to supply his distillery.

A bit more research and I found an article in The North Carolina Historical Review, Vol. 66, No. 1, JANUARY 1989 – The Whiskey Rebellion in North Carolina (accessed via JSTOR) which states ...

What do you know, the early ledgers end up being Henry Reid’s ledgers for his distillery business.  After all, those winter nights in the mountains can be chilly. I just might have to check the court minutes to see when Henry got his license to sell spirituous liquors.

A reminder that even back at the turn of the 18th century, the neighborhood apparently enjoyed its whiskey.

The serendipity is that today, as I am catching up on some genealogy newsletters I receive, I read the one from AOTUS (Archivist of the ) titled Patent of the Month: Still Design, 1808.  Apparently, there will is an exhibit planned for 2015 at the National Archives: “.” 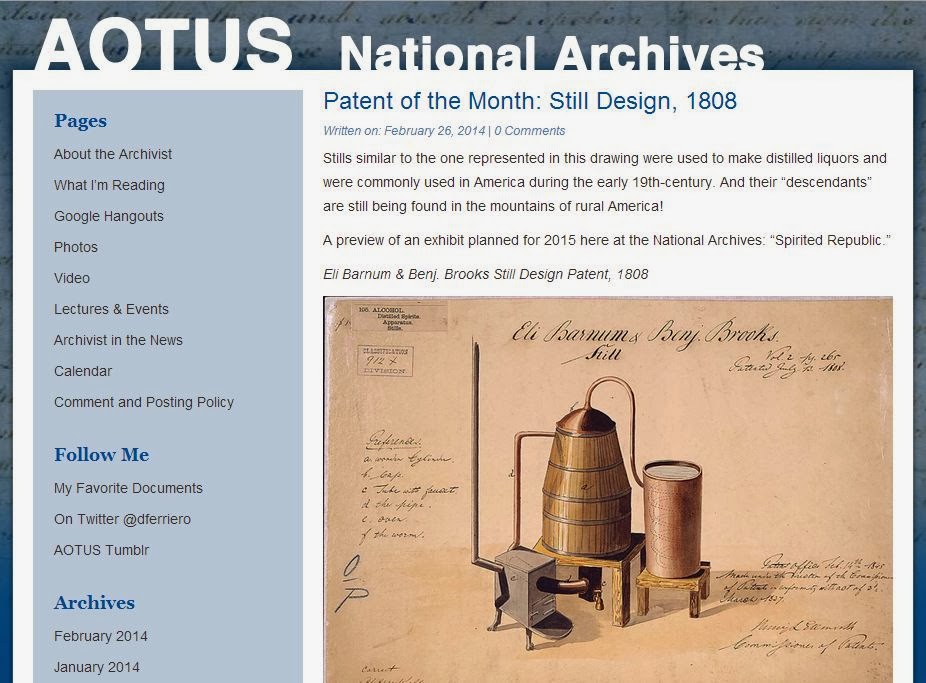 Now that I have personally seen the ledgers of an 18th (early 19th) century distiller, I think I will need to check out that exhibit and learn some more about our ancestors and their consumption of liquor.

Have you come across similar ledgers in the course of your research?