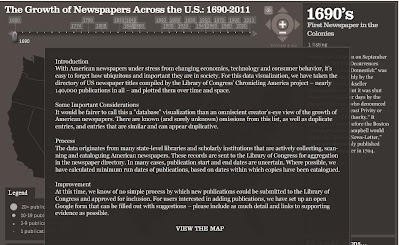 The Rural West Initiative, for the American West at has created a very interesting visualization which plots over 140,000 newspapers published over three centuries in the . The data comes from the Library of Congress' "Chronicling America" project, which maintains a regularly updated directory of newspapers.
This is not just fascinating and also helpful to us genealogists!  Though created to give a sense of journalism’s voyage west (which it does), it also allows anyone researching ancestors anywhere in the , to get a sense of the density of newspapers in existence at any given point in time.  For example, in the 1770s, as expected, newspapers were pretty much only published along the eastern seaboard.  By 1807, there was a much more extensive network of published newspapers, though, if your ancestors lived in western NC, the graphic suggests that there were not newspapers being published.
﻿﻿﻿﻿﻿﻿﻿﻿﻿﻿﻿﻿﻿ ﻿﻿﻿﻿﻿
Additionally, it is clear when newspapers were at the peak of their existence and the subsequent and persistent decline since as the visualization includes through the current year (2011.)
﻿﻿
~~~~~~~~~~~~~~~~~~~~~
copyright © National Geogical Society, 3108 Columbia Pike, Suite 300, Arlington, Virginia 22204-4370. http://www.ngsgenealogy.org.
~~~~~~~~~~~~~~~~~~~~~
Republication of UpFront articles is permitted and encouraged for non-commercial purposes without express permission from . Please drop us a note telling us where and when you are using the article. Express written permission is required if you wish to republish UpFront articles for commercial purposes. You may send a request for express written permission to [email protected]. All republished articles may not be edited or reworded and must contain the copyright statement found at the bottom of each UpFront article.
~~~~~~~~~~~~~~~~~~~~~
﻿﻿
Follow via Facebook, YouTube, Vimeo and Twitter.
~~~~~~~~~~~~~~~~~~~~~
﻿﻿
Think your friends, colleagues, or fellow genealogy researchers would find this blog post interesting? If so, please let them know that anyone can read past UpFront with NGS posts or subscribe!
~~~~~~~~~~~~~~~~~~~~~
Suggestions for topics for future UpFront with posts are always welcome. Please send any suggested topics to [email protected].
Posted by Diane L Richard at Thursday, September 15, 2011