Fold3 opening War of 1812 images for FREE during June 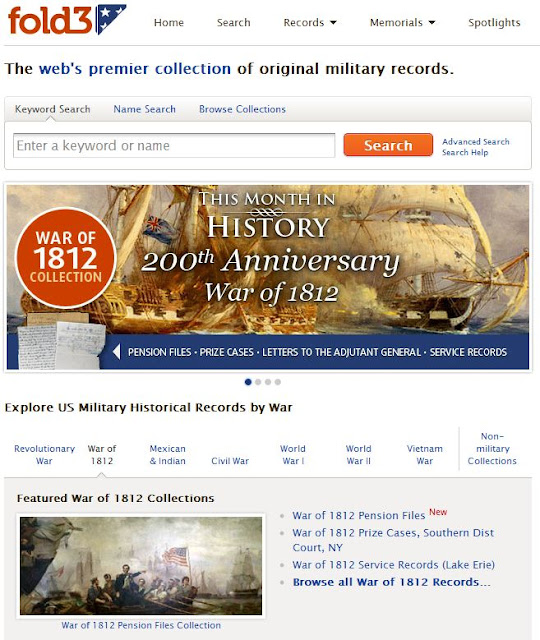 On June 18, 1812, the declared war on officially launching the War of 1812. In the 200 years since, it has become a forgotten war, perhaps best remembered by school children as when The Star-Spangled Banner was written. Yet, the War of 1812 was strategically important to the future of American diplomacy, a reinforced independence from , and the country’s westward expansion.

Several events provoked President James Madison to request action from Congress to enter a war with one of the world’s most powerful nations, less than thirty years after the Revolutionary War ended. Uppermost was the unlawful impressment of American sailors into a British Navy eager to replenish its ranks during the lengthy Napoleonic Wars. also restricted ’s right, as a neutral country, to trade with .

On the home front, Americans were embracing the concept of “Manifest Destiny.” Migrations into the provoked confrontations with Native American tribes. The British supported the rights of the Indians to maintain and defend their territories, but Americans were eager to push them westward and claim their land. The war is best remembered by , a friend to both Indians and , and on whose border many battles took place.

Fold3 observes the War of 1812 bicentennial with rich and revealing historical documents within the War of 1812 Collection. They include the War of 1812 Prize Cases from New York’s Southern District Court, Letters Received by the Adjutant General, and War of 1812 Service Records for Lake Erie and Mississippi, and, perhaps most revealing, the War of 1812 Pension Files. The pension files are digitized in color at the National Archives in , with funding provided by the Federation of Genealogical Societies’ Preserve the Pensions! Project. They are brought to Fold3 visitors at no charge.

Help us honor those who served in this highly important, yet overlooked event in history by exploring the War of 1812 Collection with its many stories of our fledgling nation’s second revolution.

Email ThisBlogThis!Share to TwitterShare to FacebookShare to Pinterest
Labels: War of 1812