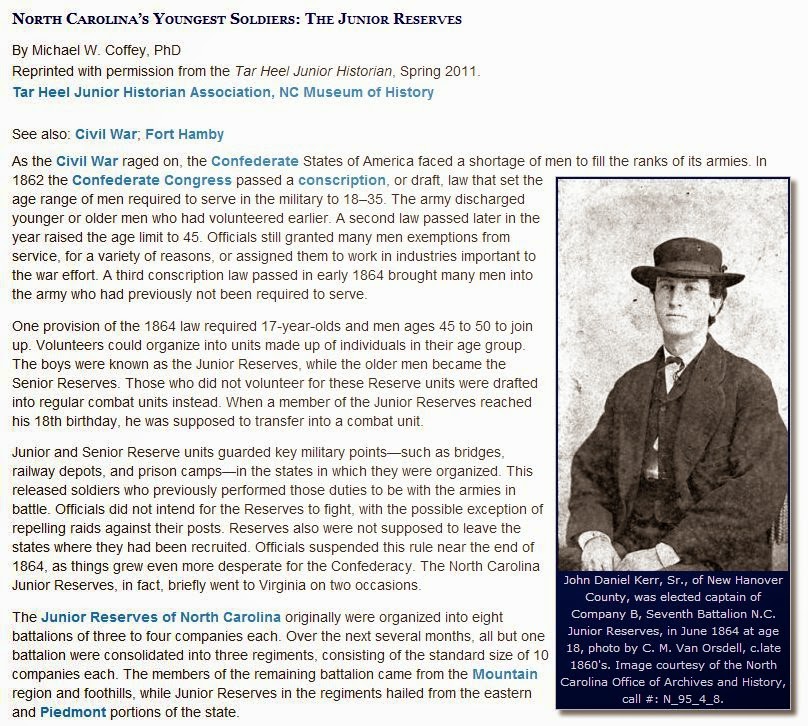 A recent post by genealogy decoded (aka Beth Foulk), Militia Units and Volunteer Units – What’s the Difference? reminds us that just because an ancestor was referred to as a captain, this doesn’t always mean that he served in the regular army with that rank.

It could be that he served in the militia or home guard, for example.  Or, as I recently learned in NC, someone I was researching served in the Civil War in the “Junior reserves” as a 17 year old.  I was previously aware of the Senior Reserves when I unexpectedly found a person (John W Grissom serving from ) listed as serving in that capacity.

The Senior Reserves were men between the ages of 45 and 50, who were called into service in 1864, as the Confederacy was feeling the effects of the ’s larger numbers. North Carolina raised five regiments, four battalions, and two independent companies of Senior Reserves, from all parts of the state except those under Union occupation. At various times, Senior Reserves guarded bridges and depots, rounded up deserters, and guarded prisoners at and elsewhere. Some saw action in with General Hardee as he attempted to hold off the Federal advance to , some aided in the defense of , and some fought at Bentonville, the last major battle of the war.
(Source: Senior Reserves description provided in already-referenced article)

I was reminded of the many ways in which men served during the Civil War when I wrote a piece about Civil War newspaper research and came across this entry ...

This means that you don’t want to stop your research if you don’t find your person listed as having served as a Confederate or soldier, for example, as there are many other ways in which he could have “served” and could have a “rank” associated with his surname in later records.

Editor’s Note: The Civil War Service Records collection at Fold3 has the records for the Confederate Third Battalion Senior Reserves North Carolina which shows John W Grissom’s service telling us that when he enlisted he was 47 years, 8 months and 6 days old and 5 feet and 9 ½ inches tall.