An article in the Washington Post by  By Lisa Rein, Washington Post Staff Writer, really caught my eye.  It focuses on NARA recovering "stolen" treasures of the National Archives.  Unfortunately, the "theft" of treasures from archives and repositories is "big business" though now NARA and other similar institutions have new technology and advanced techniques to first prevent anything "walking out the door" while also recovering what has already done so.

23 February 2011, FRANKLIN, TENN. - "Among the Civil War buffs wandering through the tables of muskets and faded daguerreotypes of Union soldiers for sale here are four federal agents.

One raids houses and carries a gun. But right now he's handing out innocuous-looking brochures to the relic hunters walking by, as the sweet smell of glazed nuts wafts from a concession stand. "Does that document belong in the National Archives?" the brochure asks.

The agents have flown to a fairground outside Nashville to the country's biggest Civil War show to hunt for stolen treasure - robbed right from the nation's attic." 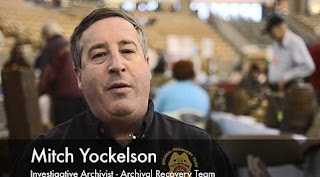